‘Support Each Other’: An Initiative to Spread Health and Happiness

Grand Old House and The Wharf launched an initiative to support tourism workers stranded in the Cayman Islands and struggling to survive without any income.

The coronavirus lockdown has affected everybody in the Cayman Islands, but some are more affected than others – particularly the large number of workers in the tourism and hospitality industry. Businesses forced to close cannot meet their overheads, their staff has been left jobless, and just about everyone’s livelihood has disappeared.

Grand Old House and its sister restaurant The Wharf know first-hand what it is like for business owners and their staff during this very difficult time. As two of the most popular Cayman Island restaurants, they are landmarks on the local scene and each employs a large staff. But rather than shut their doors and sit out the lockdown, they came up with an initiative to help ease the burden of workers in need, struggling to survive with no income.

The ‘Support Each Other’ initiative was set up by Grand Old House and The Wharf to provide a meal a day from their own kitchens to help support laid-off workers. As well as providing meals to their staff, the restaurant’s meals are distributed through a number of local charities, including Meals on Wheels, Acts of Random Kindness, Family Resource Centre, and churches.

Forced to close because of curfew regulations, the restaurants began supplying meals to their own laid-off workers. Seeing that there were large numbers of workers across the industry stranded in the Cayman Islands and struggling to survive without any income, the ‘Support Each Other’ initiative took off. Staff volunteers their time and the restaurants had to get special permission to open during the curfew to meet the demand. 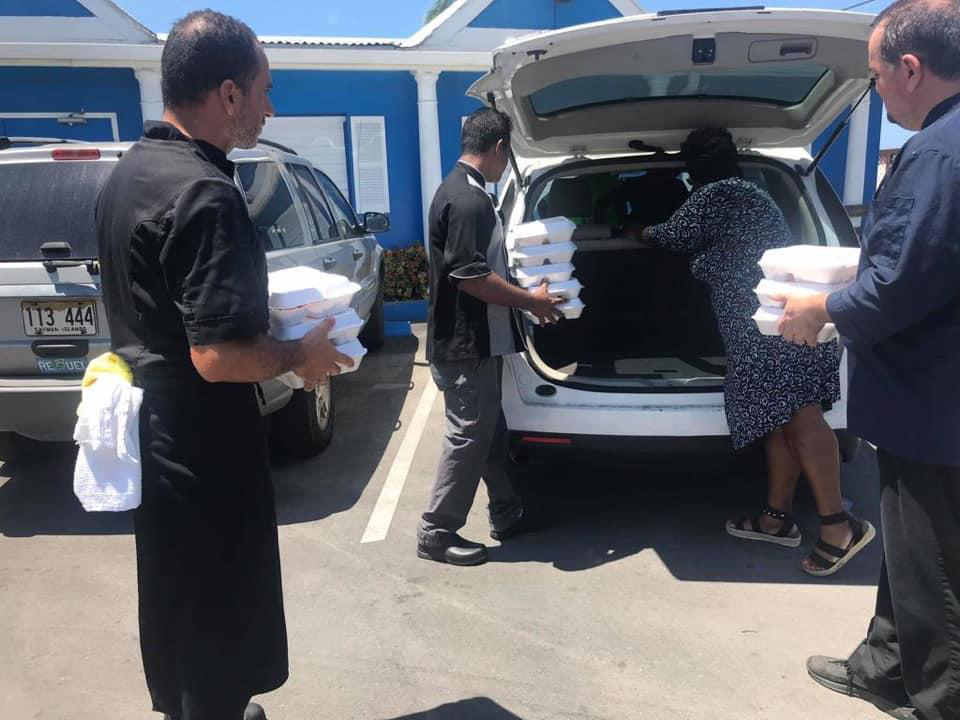 Since the initiative started in late March, the two restaurants are now supplying more than 250 meals a day to those in need thanks to an army of volunteers, including their kitchen staff, and food and drink donations from local businesses and farms.

While some employers in the Cayman Islands tourism sector are still able to pay their staff, many are not. With no revenue coming in many businesses, even those with reputations for the best food in the Cayman Islands, have been forced to close the shutters and send staff home without pay – indefinitely. This is especially hard for expatriate workers with no local support network or any chance to leave the islands and return to their homeland while the lockdown is in force.

The success of Support Each Other is down to the dedicated work of the restaurants’ volunteers, the generosity of suppliers, and cash donations from regular customers. Grand Old House and The Wharf aim to keep the initiative going for as long as it takes and for as long as they have the resources to keep supplying free meals to tourism workers struggling to survive.